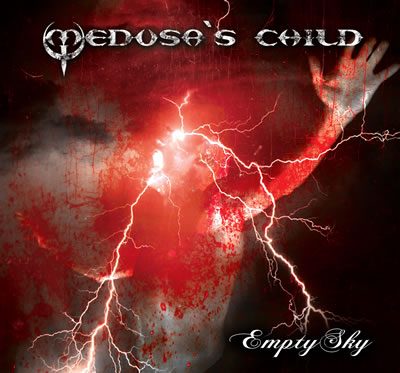 More information about the current release!

Finally news from Medusa's Child...
Soon we will make our way to Asia. The "Invasia Tour 2018" takes us through Japan and China.
New merch, new songs, it's going to be great! 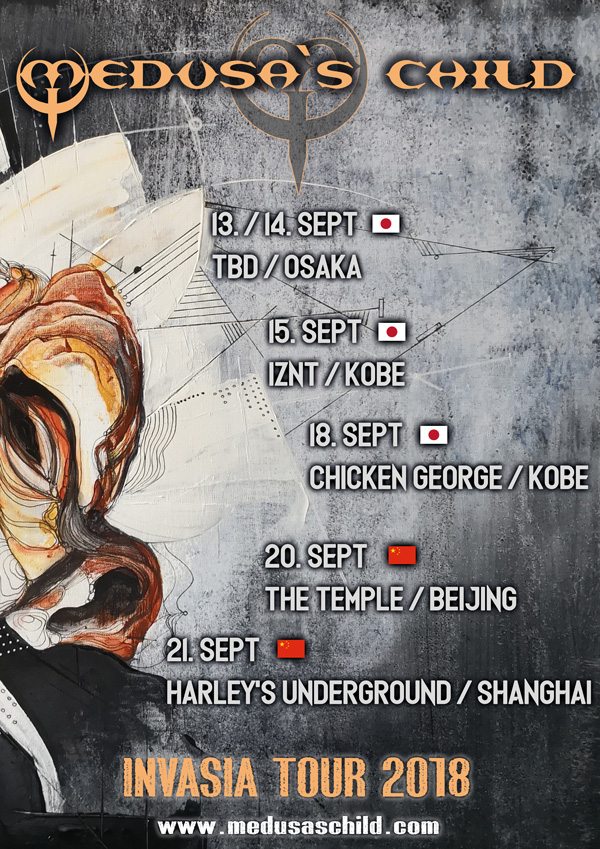 The images of our Japan tour are online.
A huge thank you to Helen Hiizumi for the images, the support and the perfect organization!!

Unfortunately we have to announce that Cyrill will leave Medusa’s Child. Here his statement:

“Medusa’s Child was a good compensation for me and I rocked numerous concerts in different European countries as well as in China and Japan with the guys. We had good times at the studio in Finland and spent several rough nights together. I really enjoyed this time!
In the last few years the interest to play in new countries had been increasing and the idea to record a new album became more and more the plan. These things need a lot of time and lifeblood. After a long thought I realized I can’t find that time because of job-related reasons and also my lifeblood wasn’t 100% anymore. This moved me to the decision to leave Medusa’s Child and give way to a new guitar player.
Thanks a lot for the awesome time!!

Cyrill is going to play his farewell concert on the 18th of February 2017 at the Pub Frutigen.
We really regret that he is leaving the band and we’d like to thank him for his effort, the good songs and ideas, the parties,...

And now the good news. Alain who already supported us last year on our Asia tour decided to be an official member of Medusa’s Child. Welcome!!

The pictures of the recent Japan tour will be online soon.

Soon we will be playing in Japan on our "Unleashed in the East Tour". We're looking forward! 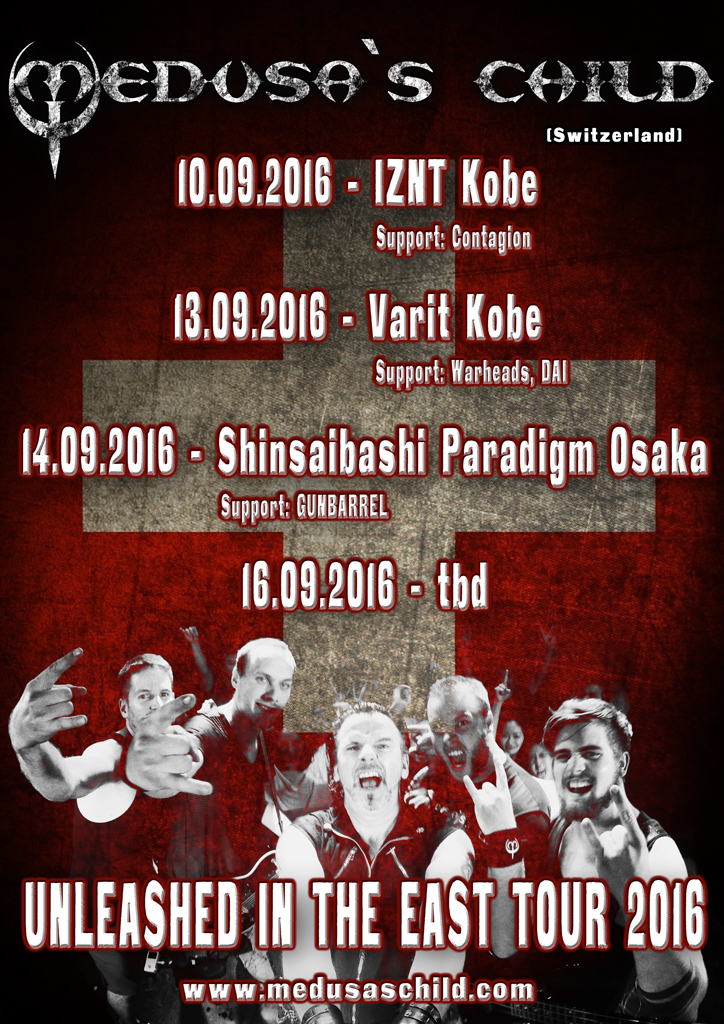 A new video with some impressions of our Asian Sky Tour 2015 is online.

It’s been a while now since we’re back from China and Japan. Here are a few words about the tour.

When we got into the plane in Zurich we didn’t know exactly what to expect. We had only a fraction of our normal equipment with us and, instead of our own clothes, our luggage was full of merchandise, CDs and banners. After the first soundcheck in China we realized however immediately, with a bit of flexibility and the necessary looseness we would have some interesting, educational as well as intensive 10 days ahead. This was confirmed directly during and after the concert. Straight from the beginning the audience was with us and the concert proceeded, despite some mishaps, better than we would ever have expected. Even after the concert we were thrilled by the audience. We signed CDs, T-Shirts etc. and the people were very interested and open-minded. Unfortunately, we didn’t have much time to celebrate because our flight to Japan was early the next morning.
Arrived in Japan, Helen our tour manager picked us up at the airport. She had it all perfectly organized: concerts, hotels, transports, support acts and so on. On the same day, we played our first Japan show at the iznt club in Kobe. The Soundcheck proceeded moderately but then the concert went very well. Again the audience was unbelievable and we had good fun on the stage. We realized, Japanese people know how to rock!! The remaining concerts were also a success for us. The audience always took care of a really good mood and atmosphere and was therefore responsible for a large part of the success.
Of course, not everything always went according to the plan and we had a few mishaps: an incident with the police, hangovers, instruments which all of a sudden wouldn’t work anymore, the cold of the singer, unwanted contacts with the Mafia, just to name a few :)
Nevertheless the whole tour was a huge success and went way too fast.

At this point a huge THANK YOU to Helen, without her it would not have been possible. Our thanks also go to all who supported us in any way: support bands, club owners, organizers etc. and of course to all our fans! You are the best!

Below a few images of the concerts as well as some other impressions of the tour.

All the dates are fixed and the locations are confirmed. Moreover all the flights are booked and the preparations are in full progress. We really look forward to rock China and Japan!
For more information about the dates and locations click on Tour or on the image below. 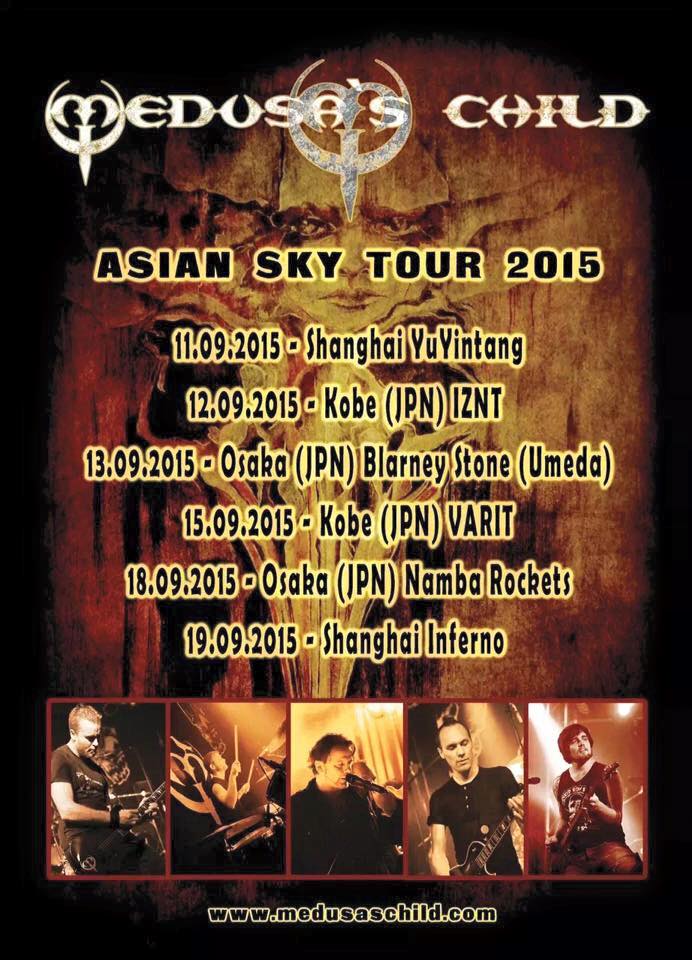 Below some information about the "Rock im Zelt". See you there... 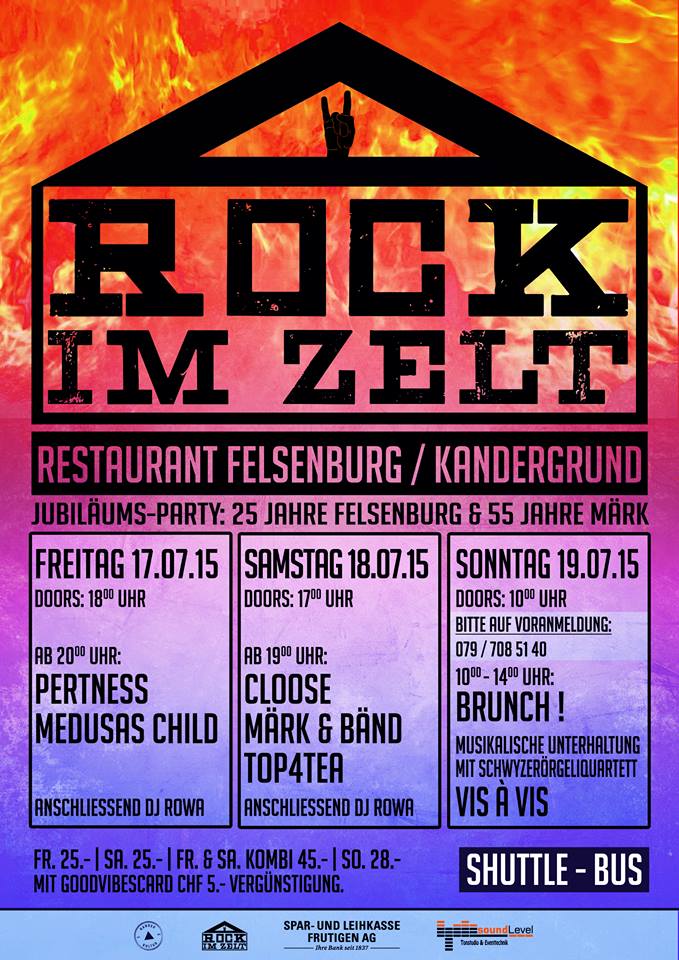 This fall we will load our instruments into a plane and tour with our current album "Empty Sky" through Asia (China, Japan). The shows are confirmed, the details about locations and support acts will follow.
For more information about the dates click on Tour.

Due to an injury (broken metacarpal) of our guitarist Tony we have to cancel the gig in the KW70 Bad Salzungen on 28.12.2014. We regret that we can't play the show and we hope to see all our German friends soon!

We regret to inform you that our bassist Markus Moser left the band due to changes in his working environment. We would like to thank him for his efforts and involvement and we wish him all the best for the future.

Thus we are looking for a replacement. Those who are interested, feel free to contact us at info(at)medusaschild.com!

Below the interview with Crow from the current issue of the Hardline Magazine (only in German)
http://www.hardline-magazine.de/

Below the interview with Crow from the current issue of the magazine Rock It! (only in German)
http://www.rock-it-magazine.de

This year we celebrate our 15th anniversary (1999 - 2014). The celebration will be held on the 30.08.2014 at the Simplon in Frutigen. Together with ANCARA (Fin) and special guests (tba) we will be playing a concert with various specials and surprises. Don't miss out! 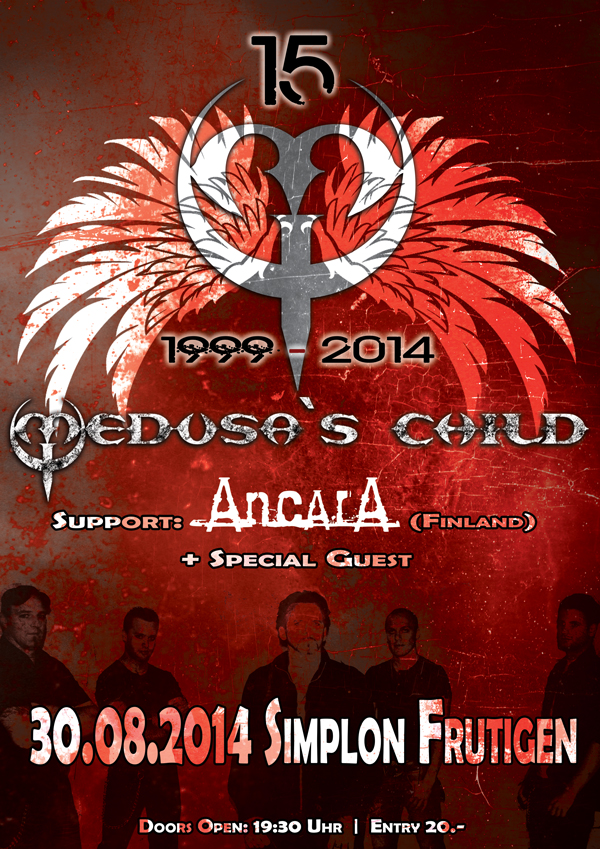 In the section Releases -> Reviews / Press you can find all the reviews for the new album "Empty Sky" as well as to the other albums.
Here are a few links to reviews of current magazines.

A new video to the current ballad "My Inner Voice" showed up in the internet.
Author / Source: unknown

In time for the release of our new album "Empty Sky" the new website with the new design is online.
Jules, thank you for your professional work!

The new Album "Empty Sky" is going to be released on May 15th 2014 with Pure Steel Records. A short promo-trailer is now online.

With a little delay the pictures of the Metal Marmot Festival 2013 are now online.

First we wish you guys a happy new year!!

A few months ago we presented a few pics from the photo shooting for the upcoming album “Empty Sky”. As always when we do photo shootings about 90% of the photos taken are for us so far in explicably useless. Out photographer was very focused in his work, the band members had a little more troubles here…

A short trailer about the Re-Release of the album "Damnatio Memoriae" is online.

"The Power-Metal quintet, founded in 1999, had released two albums (“Awake” in 2000, “Immortal” in 2004) before “Damnatio Memoriae” was released in 2009, originally via the band’s own label Black Board Records.

We are very happy to do the promotion for “Damnatio Memoriae”, even four years after the release, because we are convinced of the powerful force of this one hour album. They are unmistakably coined by the older HAMMERFALL (“Glory to the Brave”-era), GAMMA RAY and partly STRATOVARIUS in their best times (mid/late 90s) and play 16 very catchy songs (including some intros and interludes), which convince at once with untamed joy of playing music and authentic passion and commitment. Strong melodic Power-vocals meet pounding and driving double-bass parts, sophisticated twin-leads, discreet keyboards that are applied to the point, and a high class songwriting, which does not sound like a cheap copy of the aforementioned influences, but spreads an absolutely unique and distinctive atmosphere!

A true manifesto for all sword-brothers!"

It’s already the fourth time that the Metal Marmot Festival takes place at the Hotel Simplon in Frutigen. After the break last year we’re back on stage with our brand-new material. Our new CD “Empty Sky” which we recorded in Finland in August/September is going to be released that evening. The preparations for the show are in full swing and let’s just say that: along with the new songs, there will be a few additional extras. So don’t miss it, see you there!!

After two intensive and successful weeks we are back from the studio.

In Studio57 in Alaveteli we were able to record all 10 songs as planned and spent a very exciting and educational time. With the support of Pasi Kauppinen (Studio57 and bassist of Sonata Arctica), we managed to improve the details of the songs and we are more than satisfied with the result. The atmosphere in and around the studio was ideal. At this point a big "thank you" to Finland to Pasi and Masi, the owner of the studio. In addition, we received spontaneous support of another prominent musician, Henrik Klingenberg (keyboarder Sonata Arctica). He is going to record the keyboard for a part of the songs.

Now the songs are being mixed and mastered in Finland. We are currently working on the design for the CD cover and booklet.

Soon we will present a short video about our time in the Studio. The pictures are already online.

We welcome comments and suggestions in the guestbook.

The pics are right here

On the weekend we were visited by a photographer. The result you can see here.

All the demos of the new songs are finished and recorded. Until we take off to Finland we're working on the details and fill-ins and of course we're planning the comming days in the studio.

After almost a year break we get back on track. At the moment we are working with full force on our next album which will be released in December this year. The first demos are already in the box and it will be different from anything we've done before. But don't worry, it will still be Medusa's Child.

In recent times it was relatively quiet on our website because we didn't update the site very often. Now we revised the whole page structure and replaced some modules. Theres also some new sections like the Shop where you can order some merchandise stuff. As you can see, the design stayed the same.
For our German speaking freidns we translated the page, so it's possible to switch between English and German.

Thanks a lot Jules (www.dreamdiver.ch), you did a great job!

Chek it out and let us know what you think by signing the guestbook.